You are here: Home - Life Insurance

Request A Call Back *

(or life assurance, especially in the Commonwealth of Nations) is a contract between an insurance policy holder and an insurer or assurer, where the insurer promises to pay a designated beneficiary a sum of money (the benefit) in exchange for a premium, upon the death of an insured person (often the policy holder). Depending on the contract, other events such as terminal illness or critical illness can also trigger payment. The policy holder typically pays a premium, either regularly or as one lump sum. Other expenses, such as funeral expenses, can also be included in the benefits.

Life policies are legal contracts and the terms of the contract describe the limitations of the insured events. Specific exclusions are often written into the contract to limit the liability of the insurer; common examples are claims relating to suicide, fraud, war, riot, and civil commotion.

Modern life insurance bears some similarity to the asset management industry[1] and life insurers have diversified their products into retirement products such as annuities.[2]

The person responsible for making payments for a policy is the policy owner, while the insured is the person whose death will trigger payment of the death benefit. The owner and insured may or may not be the same person. For example, if Joe buys a policy on his own life, he is both the owner and the insured. But if Jane, his wife, buys a policy on Joe’s life, she is the owner and he is the insured. The policy owner is the guarantor and he will be the person to pay for the policy. The insured is a participant in the contract, but not necessarily a party to it. 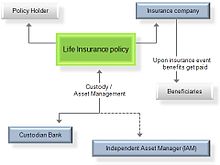 Chart of a life insurance

Special exclusions may apply, such as suicide clauses, whereby the policy becomes null and void if the insured commits suicide within a specified time (usually two years after the purchase date; some states provide a statutory one-year suicide clause). Any misrepresentations by the insured on the application may also be grounds for nullification. Most US states specify a maximum contestability period, often no more than two years. Only if the insured dies within this period will the insurer have a legal right to contest the claim on the basis of misrepresentation and request additional information before deciding whether to pay or deny the claim.

The insurance company calculates the policy prices (premiums) at a level sufficient to fund claims, cover administrative costs, and provide a profit. The cost of insurance is determined using mortality tables calculated by actuaries. Mortality tables are statistically based tables showing expected annual mortality rates of people at different ages. Put simply, people are more likely to die as they get older and the mortality tables enable the insurance companies to calculate the risk and increase premiums with age accordingly. Such estimates can be important in taxation regulation.

In the 1980s and 1990s, the SOA 1975–80 Basic Select & Ultimate tables were the typical reference points, while the 2001 VBT and 2001 CSO tables were published more recently. As well as the basic parameters of age and gender, the newer tables include separate mortality tables for smokers and non-smokers, and the CSO tables include separate tables for preferred classes.

The mortality tables provide a baseline for the cost of insurance, but the health and family history of the individual applicant is also taken into account (except in the case of Group policies). This investigation and resulting evaluation is termed underwriting. Health and lifestyle questions are asked, with certain responses possibly meriting further investigation. Specific factors that may be considered by underwriters include:

Based on the above and additional factors, applicants will be placed into one of several classes of health ratings which will determine the premium paid in exchange for insurance at that particular carrier.

Automated Life Underwriting is a technology solution which is designed to perform all or some of the screening functions traditionally completed by underwriters, and thus seeks to reduce the work effort, time and/or data necessary to underwrite a life insurance application. These systems allow point of sale distribution and can shorten the time frame for issuance from weeks or even months to hours or minutes, depending on the amount of insurance being purchased,

The mortality of underwritten persons rises much more quickly than the general population. At the end of 10 years, the mortality of that 25-year-old, non-smoking male is 0.66/1000/year. Consequently, in a group of one thousand 25-year-old males with a $100,000 policy, all of average health, a life insurance company would have to collect approximately $50 a year from each participant to cover the relatively few expected claims. (0.35 to 0.66 expected deaths in each year × $100,000 payout per death = $35 per policy.) Other costs, such as administrative and sales expenses, also need to be considered when setting the premiums. A 10-year policy for a 25-year-old non-smoking male with preferred medical history may get offers as low as $90 per year for a $100,000 policy in the competitive US life insurance market.

Most of the revenue received by insurance companies consists of premiums, but revenue from investing the premiums forms an important source of profit for most life insurance companies. Group Insurance policies are an exception to this.

In the United States, life insurance companies are never legally required to provide coverage to everyone, with the exception of Civil Rights Act compliance requirements. Insurance companies alone determine insurability, and some people are deemed uninsurable. The policy can be declined or rated (increasing the premium amount to compensate for the higher risk), and the amount of the premium will be proportional to the face value of the policy.

Many companies separate applicants into four general categories. These categories are preferred best, preferred, standard, and tobacco. Preferred best is reserved only for the healthiest individuals in the general population. This may mean, that the proposed insured has no adverse medical history, is not under medication, and has no family history of early-onset cancer, diabetes, or other conditions. Preferred means that the proposed insured is currently under medication and has a family history of particular illnesses. Most people are in the standard category.

People in the tobacco category typically have to pay higher premiums due to the higher mortality. Recent US mortality tables predict that roughly 0.35 in 1,000 non-smoking males aged 25 will die during the first year of a policy.Mortality approximately doubles for every extra ten years of age, so the mortality rate in the first year for non-smoking men is about 2.5 in 1,000 people at age 65.Compare this with the US population male mortality rates of 1.3 per 1,000 at age 25 and 19.3 at age 65 (without regard to health or smoking status).

Payment from the policy may be as a lump sum or as an annuity, which is paid in regular installments for either a specified period or for the beneficiary’s lifetime.

Term assurance provides life insurance coverage for a specified term. The policy does not accumulate cash value. Term insurance is significantly less expensive than an equivalent permanent policy but will become higher with age. Policy holders can save to provide for increased term premiums or decrease insurance needs (by paying off debts or saving to provide for survivor needs).

Mortgage life insurance insures a loan secured by real property and usually features a level premium amount for a declining policy face value because what is insured is the principal and interest outstanding on a mortgage that is constantly being reduced by mortgage payments. The face amount of the policy is always the amount of the principal and interest outstanding that are paid should the applicant die before the final installment is paid.

Constitutionalcouncil.com is India’s largest online business services platform dedicated to helping people easily start and manage their business, at an affordable cost. Our aim is to help the entrepreneur on the legal and regulatory requirements, and be a partner throughout the business lifecycle, offering support at every stage to ensure the business remains compliant and continually growing.